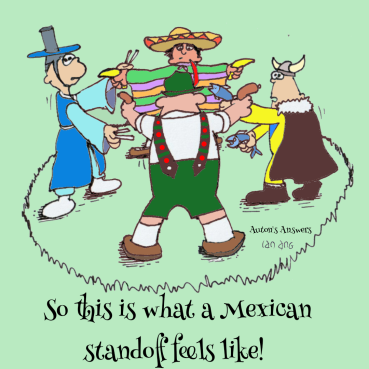 The Mexican Standoff is a movie cliché frequently used as a plot device in film to exaggerate drama, and test the nerves of both characters and audiences alike.  I don’t know if anyone has ever survived a real one, but the pair of games on 27 June 2018 seemed to epitomise this.  In a frantic few minutes, the Mexicans were shot 3 times, but the South Koreans saved them by unbelievably shooting down the Germans!  Well deserving of a quick cartoon before the next game kicked off.